Especially labour-intensive organizations are considered as a social structure because they have more people. Employees and groups in the work environment continue their duties in interaction with other employees and groups. While they continue their duties, they display different behaviours according to the situation and conditions. The behaviours exhibited by individuals and groups in the face of phenomena and events during the working process directly or indirectly affect the effectiveness and productivity of organizations.

Many variables emerge through interaction within the organization, and these variables affect the physical, psychological, and social aspects of the employees and also their work-life positively or negatively. For example, while effective leadership and motivation increase the performance of employees, on the other hand, facts such as mobbing, stress, and burnout cause the productivity of the employees to decrease (Vévodová et al., 2020), and organizational silence causes the performance of the organization to decrease (Cetin, 2020). Therefore, this study addressed the issues of mobbing and organizational silence that harmed organizations to be understood better. More specifically, this study focused on educational institutions and aimed to examine the effect of mobbing behaviour on the organizational silence of academicians. In this framework, firstly the theoretical framework was formed, then the research methodology and findings were presented, and finally, the results obtained were discussed.

Austrian Scientist Konrad Lorenz (1963), who observed that a group of animals generally targeted a single animal for intimidating, was the first person to mention mobbing behaviour. Later, Heinemann (1972) used this term to examine children's group behaviour related to harming a group member by the other group members. In the final stage, Leymann (1996), a Swedish Psychologist, has become a leading researcher in the workplace that focuses on the psychological effects of psychological harassment on employees. Concentrating his research on employees within the organization, Leymann defined mobbing behaviours in the workplace as follows: "[…] a social interaction through which one individual (seldom more) is attacked by one or more (seldom more than four) individuals almost daily and for periods of many months, bringing the person into an almost helpless position with a potentially high risk of expulsion" (p. 168). To further clarify the issue, Leymann has divided 45 mobbing behaviours into five different categories: Impact on self-expression and communication (i.e., oral threats are made, contact is denied); attacks on the target employee's social relations and interactions at the workplace (i.e., banning the target employee from speaking to coworkers); attacks on the target employee’s reputation (i.e., gossiping about the target employee); attacks on the quality of the target employee’s profession and life situations (i.e., you are given meaningless jobs to carry out, you are continually given new tasks); attacks on the target employee’s health through looks or gestures (i.e., you are forced to do a physically strenuous job).

The concept of mobbing used in working life is also expressed with concepts such as bullying, harassment, psychological terror. These concepts include meanings that express any behaviours such as maltreatment, threats, violence, and humiliation that are systematically applied to employees by "superiors", "other equally employees" or "subordinates" in the workplace. For a behaviour to be considered as mobbing, the victim must be exposed to one or more of the above-mentioned actions for a long time and systematically (Zapf, 1999).

Research on mobbing shows that this phenomenon has several negative effects on both victims and organizations (Akar et al., 2011; Vveinhardt; Sroka, 2020). High burnout, low motivation, and low work quality can be given as an example of the effects on employees exposed to mobbing behaviour. Examples of the effects of mobbing on an organization are the weakening of social relations within the organization, the formation of an atmosphere of insecurity, dismissal, and compensation paid to employees (Hoel; Carneiro, 2011).

Morrison and Milliken (2000) define organizational silence as “not consciously sharing employees’ knowledge, opinions and concerns about work issues and problems with the management of the organization, on the contrary, they keep knowledge, opinions, and concerns for themselves”. Pinder and Harlos (2001) describe organizational silence as a reaction to injustice. According to the authors, talented employees hide their ideas and opinions cognitively, emotionally, and behaviorally from other employees and management.

Focusing on the organizational silence issue, Van Dyne et al. (2003) has suggested that there are three basic dimensions (acquiescent silence, defensive silence, prosocial silence) according to the intentions behind employee silence. Acquiescent silence is based on the understanding of adopting the existing situation with the belief that nothing will change. Defensive silence is meant as the individual's intentional preference to remain silent because he/she “fears the possible consequences of speaking clearly”. Prosocial silence is defined as avoiding the expression of work ideas, information, and opinions based on self-sacrifice or cooperation motives to protect the benefit of other employees or organizations.

Although silence is initially perceived as approval, the unwillingness of employees to share information is an important behaviour that affects organizational performance. Many researchers view this behaviour as a potential barrier that threatens organizational change and organizational development (Morrison; Milliken, 2000).

Relationships between Mobbing and Organizational Silence

There is a lot of research in the literature that mobbing behaviour causes negative results. These researches primarily emphasized the physical, psychological, social, and economic losses of the victim (Zulfiqar et al., 2020). However, it has also been revealed that mobbing has some negative effects on the organization. Organizational silence is one of them.

H1. Vertical/horizontal mobbing has a positive effect on acquiescent silence.

H2. Vertical/horizontal mobbing has a positive effect on defensive silence.

H3. Vertical/horizontal mobbing has a positive effect on prosocial silence.

H4. Vertical/horizontal mobbing has a positive effect on silence.

H5. Vertical mobbing has a positive effect on acquiescent silence.

H6. Vertical mobbing has a positive effect on defensive silence.

H7. Vertical mobbing has a positive effect on prosocial silence.

H8. Vertical mobbing has a positive effect on silence.

The data were obtained from the academicians of sports sciences at different universities, Turkey. Academicians were first informed in line with the purpose of the research. A questionnaire was distributed to 214 academics who voluntarily agreed to participate in the study, and they were given one week to complete. It was observed that the forms collected at the end of the period were 193. Incorrect and incomplete questionnaire forms were removed and a total of 182 forms were found suitable for analysis.

In this study, the "Mobbing Scale for Academicians (MS-A)” developed by Yildiz (2020) was used to measure mobbing. This scale consists of 10 items and two sub-dimensions (vertical/horizontal mobbing and vertical mobbing). Statement examples of the scale include: “How often you are being exposed to gossip and slander about you by your colleagues or administrator,” and, “How often you are being exposed to high or unmanageable workload intentionally by your administrator when compared others.” The statements were rated on a 5-point Likert-type scale ranging from 1 (“Never”) to 5 (“Every time”).

To measure the organizational silence scale developed by Van Dyne et al. (2003) was used. This scale consists of 15 items and three sub-dimensions (acquiescent silence, defensive silence, prosocial silence). Statement examples of the scale include: “I passively withhold ideas, based on resignation,” “I withhold relevant information due to fear,” and, “I refuse to divulge information that might harm the organization.” The statements were rated on a 5-point Likert-type scale ranging from 1 (“Strongly disagree”) to 5 (“Strongly agree”). 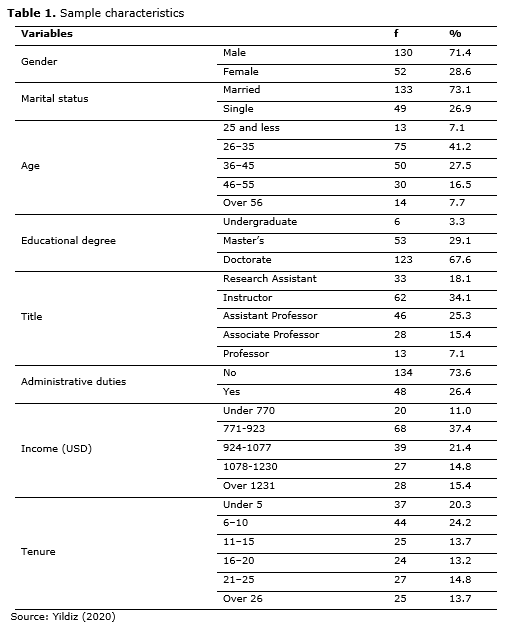 Test for Validity and Reliability

To test the dimensionality of the MS-A and the organizational silence scale, we used a conﬁrmatory factor analysis (CFA). For both scales, we ran CFA with all core variables. CFA results provided a strong model ﬁt indices (Table 2). All values of CFA meet the criteria suggested in the literature for assessing model ﬁt (Browne; Cudeck, 1993; Byrne, 2001).

The reliability analysis using the Cronbach's alpha coefficient showed a high-reliability score of 0.916 for the MS-A (vertical/horizontal mobbing=0.922; vertical mobbing=0.781), and 0.833 for the organizational silence scale (acquiescent silence=0.834; defensive silence=0.889; prosocial silence=0.840). These values indicate that all scales were highly reliable. 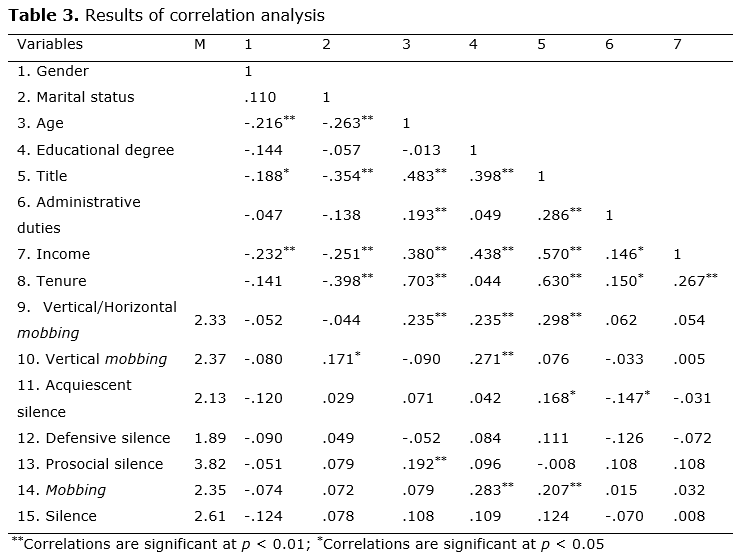 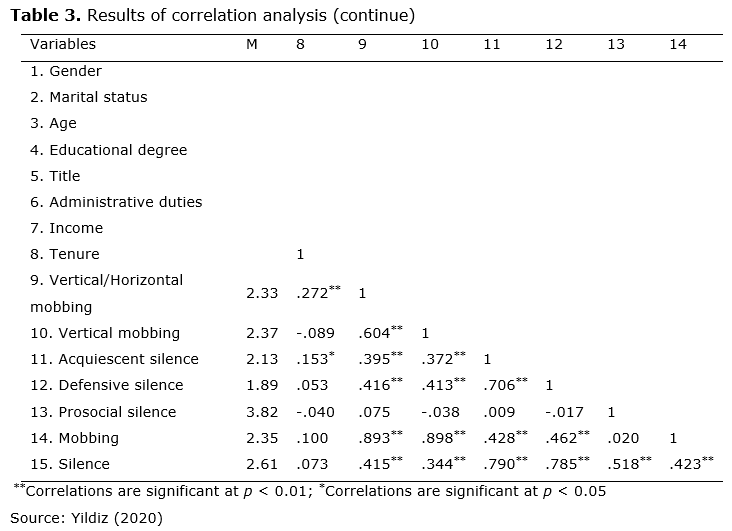 Hierarchical regression results showed that vertical/horizontal mobbing had a significant and positive effect on acquiescent (β=0.376), defensive silence (β=0.426), and silence (β=0.400). The highest effect is on defensive silence. However, there was no significant effect of vertical/horizontal mobbing on prosocial silence. According to these results, hypotheses 1, 2, and 4 were accepted (Table 4). 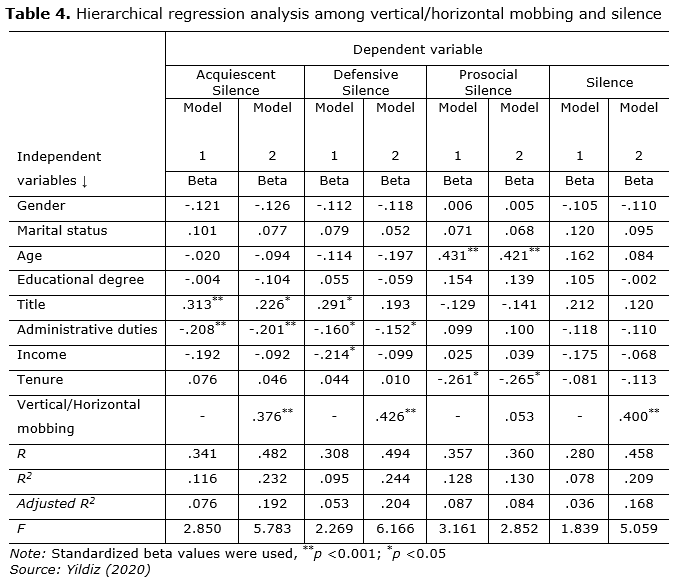 Hierarchical regression results showed that vertical mobbing had a significant and positive effect on acquiescent (β=0.372), defensive silence (β=0.396) and silence (β=0.317). The highest effect is on defensive silence. However, there was no significant effect of vertical mobbing on prosocial silence. According to these results, hypotheses 5, 6, and 8 were accepted (Table 5). 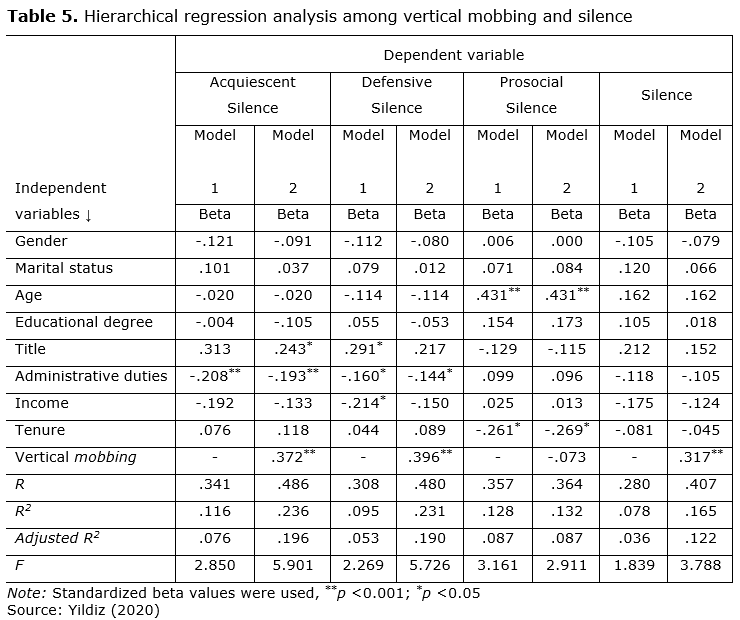 The results of this study showed that mobbing behaviours in the workplace have a significant and positive effect on the organizational silence of academicians. Similar results have been seen in researches on occupational groups in other sectors. For example, Elci et al. (2014) on employees of a public institution, Husrevsahi (2015) on teachers, and Gul and Ozcan (2011) on employees of a public institution found significant and positive effects of mobbing on organizational silence. In researches conducted on academics, mobbing has a significant and positive effect on organizational silence (Erdirencelebi; Sendogdu, 2016; Kalay et al., 2014). In our study, we put forward that the findings obtained from this sample are clearer because we use the mobbing scale developed specifically for academicians, unlike other researchers. In other words, we can say that the results in our study are more clear in the context of the academic population.

As can be seen from similar researches above, there is a consensus that mobbing affects the organizational silence of the employees. In general, it can be said that mobbing behaviours affect the victim negatively and cause it to remain silent.

In our study, unlike other researches, the relationships between the sub-dimensions of mobbing and the organizational silence sub-dimensions were examined separately. According to the results of our study, both vertical/horizontal mobbing and vertical mobbing affect organizational silence significantly and positively. These two variables also affect the acquiescent silence and defensive silence, which are the sub-dimensions of the organizational silence, significantly and positively. Employees who have acquiescent silence because of mobbing are not very interested in the subject and do not want to talk and do not make any attempt for organizational development. Employees who have defensive silence because of mobbing believe that it is a useless or even dangerous effort when they express their opinions about anything related to their jobs and as a result, they can keep any information their superiors do not want to hear. These employees ignore negative situations and do not express ideas that will contribute to development. On the other hand, both vertical/horizontal mobbing and vertical mobbing do not affect prosocial silence. Employees who do not have a prosocial silence because of mobbing do not remain silent, ignoring the goodness of others, do not think too much about the purpose and benefit of other employees, and do not have any cooperation and sacrifice for their organization. Even these employees do not tend to keep their organization's information that should be kept confidential.

Vveinhardt, J., and Sroka, W. (2020), Mobbing and corporate social responsibility: does the status of the organisation guarantee employee wellbeing and intentions to stay in the job?. Oeconomia Copernicana Vol. 11, No. 4, pp. 743–778.