Man is a great consumer of energy. Therefore, studying and improving energy supply mechanisms is of paramount importance for society. In this area, renewable energies see themselves as a great environmental ally in contrast to fossil fuels. Some examples are: solar, wind, biomass and hydro. In this work the authors calculated the wind direction, wind speed profiles, and wind potential for a region near Cabo Frio-RJ, using data from the Cabo Frio (Nova) buoy of the National Program of Boias (PNBOIA) and data from the ERA5 reanalysis of temperature, speed, wind direction and significant wave height, for the period between 01/08/2016 and 31/07/2017. The preliminary results showed that the average absolute difference between the wind speed of PNBOIA and ERA5 was approximately 1 m/s. Furthermore, through the wind rose, it was observed that there was no significant percentage difference between the wind directions of PNBOIA and ERA5. It was concluded that this is a favorable region for the installation of wind power plants.

Since human existence, man has sought mechanisms to facilitate his customary activities. Thus, by mastering the technique of fire, he has improved his quality of life (CPFL Energia, 2017). Later, more specifically since the Industrial Revolution, fossil fuels, such as coal, presented significant changes in the life of the society of the time, being the main source of energy.

With the increase in production and exploitation, there has been a significant increase in the amount of exploited area and anthropogenic emissions and, as a consequence, there is an environmental imbalance with the intensification of the greenhouse effect, global warming and deforestation of important biomes such as the Amazon, Pantanal, Cerrado and Atlantic Forest.

In the last decades, with the deepening of the discussion on renewable energy, different technologies have been developed as alternative options to the traditional ones, such as solar, wind, biomass and hydro energy. Among these, wind energy is the one that has shown the greatest growth in recent years.

According to Dutra (2008), the wind was used as a resource to help in the development of different daily tasks. In agriculture, there were windmills, which consisted of a circular cage in which animals or men walked and moved a pole placed in a vertical column. The water wheels emerged as the improvement of this system, the watercourse being its driving force.

With the wind vane, wind energy was used for grain milling and water pumping. In Europe, the use of wind vane started with the return of the Crusades, approximately in the 13th century, and it has been used and documented for a long time. The Dutch type windmill, in particular, was spread to several countries, strongly influencing the agricultural economy of the continent (Dutra, 2008)

As we know, wind energy is that which comes from the wind to produce mechanical energy. Therefore, in order to have a good and profitable use of energy, it is necessary to implement it in a region with constant winds, with intensity that can vary between moderate and very strong. In addition, preference is given to regions with less shear in the wind direction, since, with the high variation in its direction, it is necessary to implement wind generators with greater capacity for rotation, in order to capture the energy from the wind in all directions, further raising the cost (CEPEL, 2001).

Ohlenforst et al. (2018), through the Global Wind Report, showed the wind energy capacity installed by several countries between 2015 and 2018. In this period, Brazil almost doubled its capacity, although it is still far below ideal. Considering the Northeast Region of Brazil, there is a great potential for generating this type of energy, both onshore and offshore (Barcellos, 2014).

According to Aneel (2020), the Northeast is the region with the greatest potential in Brazil, with the largest number of wind power plants. The South region is also highlighted in the national panel, with a considerable number of parks in operation.

Despite having many wind farms, Brazil can and must still increase the number of wind farms and also improve its energy management, since there are still many favorable areas to be explored, in order to start balancing the national energy balance. There is also a large offshore area on the Brazilian coast that could be explored.

Offshore wind energy is gaining evidence in the world and proving to be a promising solution for the future. Since the roughness of the sea is less than that of the continent, the offshore wind has higher intensity values, which ensures that the offshore field has greater wind potential compared to the onshore. According to Ohlerfost et al. (2018), there are 4,496 offshore installations in the world, none of them in Brazil. Although there are still no aerogenerators in operation offshore, several companies have studied the implementation of wind power complexes along the Brazilian coast.

Considering the importance of this topic and the possible potential for implementing offshore wind farms, studying the intensity and direction of the wind in the ocean is very important. However, analyzing these parameters only on the ocean surface may not be efficient, as windmills are usually installed at higher levels (e.g. 30, 60, 90 or 100 meters). In addition, the closer to the surface layer, the greater the influence of roughness on aerogenerator intensity.

In view of this problem, it is important to study the wind profile and not only the surface wind, as well as calculate the energy and wind potential for the higher levels. Knowing this, the objective of this work is to study this wind profile and calculate the wind potential profile at an offshore point located near the coast of Cabo Frio, a region that frequently has moderate to strong winds on the surface.

For this study, data on air temperature, direction, wind intensity and significant buoyancy wave height from the National Boias Program (PNBOIA) located in Cabo Frio, RJ, Brazil (Figure 1) and from the ERA5 reanalysis of the European Centre for Medium-Range Weather Forecasts (ECMWF), for the period from 01/08/2016 to 31/07/2017, were used.

Figure 1. Location of the PNBOIA Buoys. 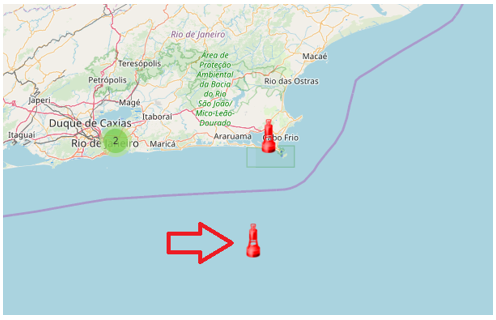 Within this time frame, a period with winds higher than 30 knots (15 m/s) was selected to perform the qualitative comparison of the ERA5 wind with the Cabo Frio buoy data. For this, the magnitude and direction of the wind was calculated between 27/11/2016 and 09/12/2016. Quantitatively, for the period between 01/08/2016 and 31/07/2017 (1 year), comparative statistical metrics were also calculated between the reanalysis and the float.

Where u is the wind speed, u* is the friction speed, k a Von-Karman constant, Z0 is the roughness and L is the length of Monin-Obukhov..

For roughness estimation, the Donelan method (1990) was used, obtained through field experiments, coming from a direct function of the significant wave height described by equation 3.

Where: Hs is the significant wave height and ξ constant.

There are several methods of estimating the mechanical power extracted by the wind turbine. However, in this study the method of Pavinatto (2005), equation 4, was used, as this is one of the most used among the most recent methods.

Where: ρ is the air density, A is the area swept by the rotor, vw is the speed incident on the rotor and cp is the power coefficient of the wind turbine.

The term cp (λ, β) depends on specific characteristics of the wind turbine and it is the ratio function of speeds (λ) and the pitch angle of the wind turbine blades (β). Since cp (λ, β) is two-dimensional, some numerical approximations are made. Thus, in equations 5 and 6 and in Figure 2, we find the numerical approximations used, as well as the characteristic graph of cp (λ, β), drawn from equations 5 and 6 (Raiambal and Chellamuth, 2002; Pavinatto, 2005; Montezano, 2007).

Figure 2. cp chart as a function of lambda 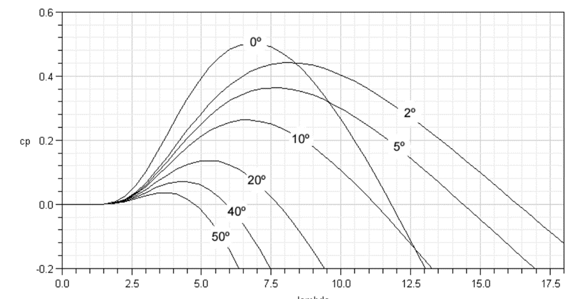 In Figures 3 and 4, the difference between the wind magnitude measurements of PNBOIA and ERA5 and the dispersion graph of these data for Cabo Frio in one year (from 01/08/2016 to 31/07/2017) is presented, respectively. As can be noted, the average absolute difference between the two is 1.06 m/s and its correlation is high (R=0.87). The dispersion graph in Figure 4 indicates that the wind speed values monitored by the ERA5 are, on average, 10 meters lower than the PNBOIA values (6.56m/s and 7.63 m/s, respectively). That is, the ERA5 is underestimating the wind magnitude in relation to the PNBOIA.

Figure 3. Difference between wind magnitude in 10 meters from PNBOIA and ERA5 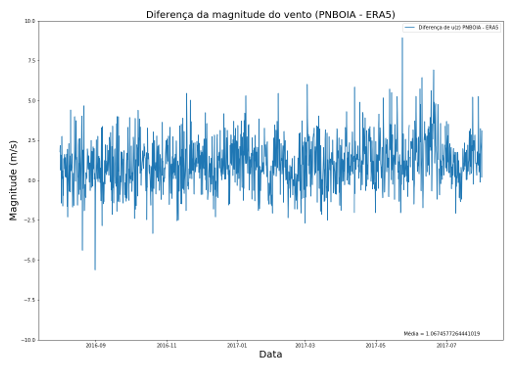 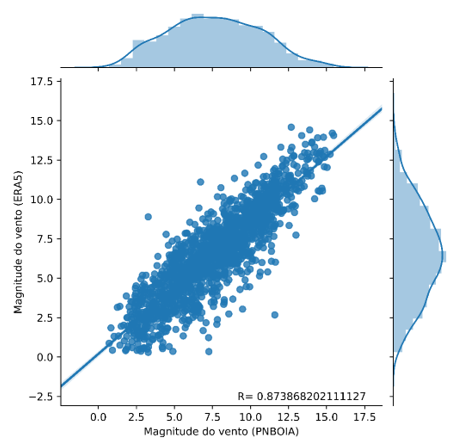 In Figures 5, 6 and 7 are the variations in wind magnitude and direction of both the Cabo Frio buoy and the ERA5 during the period of Nov. 27, 2016 and Dec. 9, 2016, and the variation in wind magnitude from 0 to 100 meters for that same period. It is noted that the wind magnitude at levels greater than 10 meters exceeded the value of 15 m/s at various times, thus showing strong intensity (Figure 7). In addition, the average absolute error of magnitude and direction in this period was approximately 1.28 m/s and 25°, respectively. Thus, the magnitude error represented about 13% of the value. 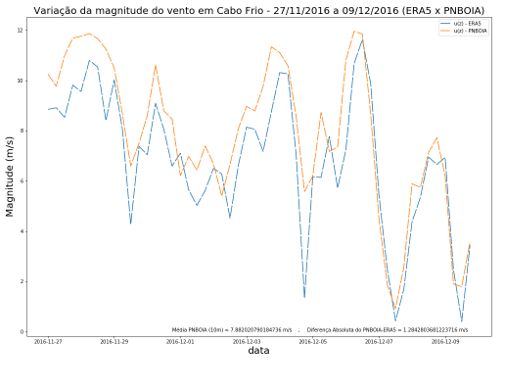 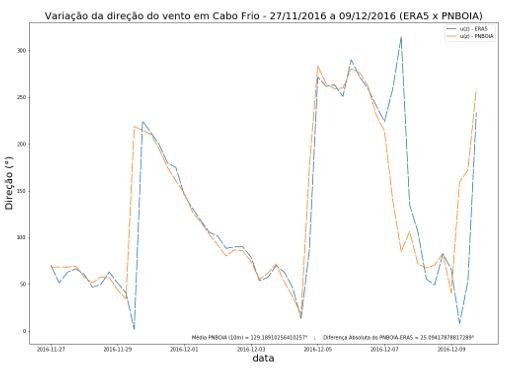 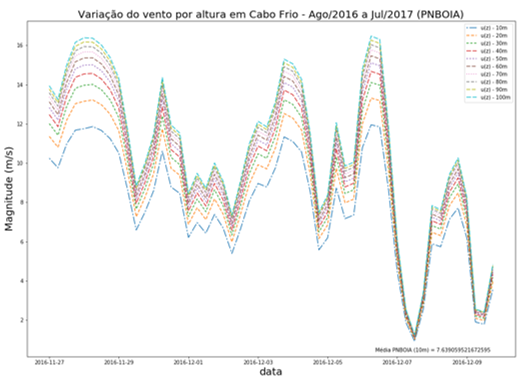 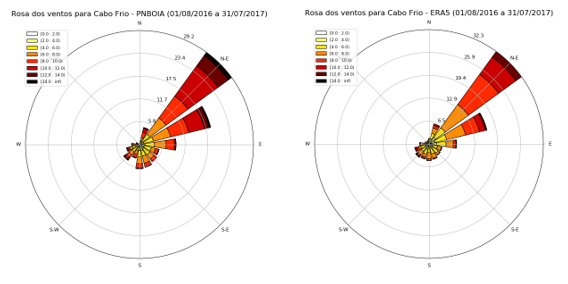 Figure 9 shows the average annual wind profile (0 to 100 meters) of PNBOIA (red) and ERA5 (blue). It is observed that due to the difference of approximately 1 m/s between the magnitude of the wind at 10 meters, the values of the levels above were also different and therefore the ERA5 also underestimates the wind in relation to the PNBOIA at higher levels.

With the wind profiles already defined in Figures 10 and 11, it was possible to calculate the wind potential profiles near the PNBOIA and ERA5 in Cabo Frio for the wind power generators ELV-H2.7 – 500 W and ELV-H20.8 – 100 kW. Due to the fact that the power is proportional to the speed cube, an underestimate of the power in ERA5 occurs proportionally. Therefore, in the case of the smaller wind generator (ELV-H2.7 – 500W), the height at which its maximum power is reached would be approximately 18 meters for PNBOIA and 60 meters for ERA5. For the ELV-H20.8 – 100 kW it would be 85 meters for the PNBOIA, while for the ERA5 the average value of 100kW is not reached up to the level of 100 meters. 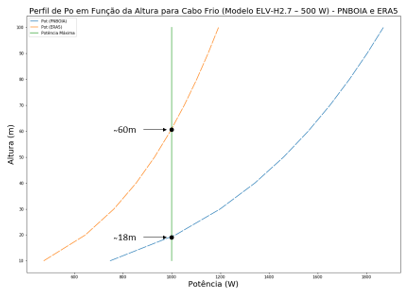 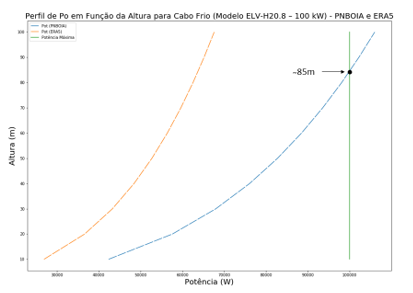 According to the data studied, it can be seen that the region of Cabo Frio, RJ, seems to be a propitious region for the establishment of this type of energy grid, since the wind direction does not vary so much and its magnitude is high, reaching the maximum power of the simulated wind power generator. However, despite the promising results, other studies need to be carried out with a larger set of data, with new methodologies for estimating the profiles, and with a larger number of types of aerogenerators, in order to further increase the knowledge of the region and the tools used.

Another relevant aspect is the harmful interference of offshore wind energy with the environment. It should not be forgotten that a better balance is needed between the national energy mix and the emergency reduction of fossil fuels. To this end, wind energy emerges as an ally.

The instrument capable of resolving this imbroglio and improving the management of environmental resources is environmental licensing, since, during the application for prior installation and operation licenses, it is up to the environmental agency (in the case of this type of licensing, the Brazilian Institute of Environment and Renewable Natural Resources – IBAMA) to determine whether the principle of sustainability, among others, will be preserved and whether there will be benefits to society.